Must See TV: Alone in a Crowded Room 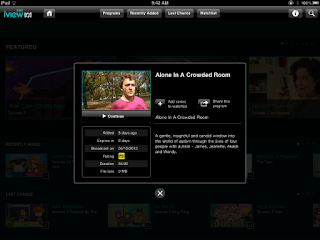 ABC iView has released a very special documentary that I hope will stay online for some time.  Alone In A Crowded Room from the series Compass is about grown adults who have Asperger’s Syndrome. The show got my attention because I couldn’t help but identify with it; although it could have felt a bit more optimistic. The examples here really do show the normality of the Aspies. It follows a former- criminal-protesting-socialist autobiographical author (Jeanette), a musician (Akash) and his Aspie band, a public speaker (Wendy), a young aspiring bus driver (James).  The show accurately portrays some difficulties for Aspies and some ways in which these people have reached their life goals. But their life stories were only as different as any 'normal' person would be. The show, in its attempt to highlight these people's differences, actually showcases examples that make these people just like everyone else.

Jeanette told a colourful story about her attempt to fit in that most of us can relate to. She discovered the socialists in her days as a student and could just more easily fit with them. Jeanette quickly realised she will be accepted by a political group if she says what they want to hear. This is more socially appropriate than the opinionated approach I take because political groups shouldn’t be censored. Society needs to represent a variety of views to keep holding people accountable and negotiating what people want. But it makes sense that an Aspie will find a group with consistently predictable views and go along with that. The show gives the impression that Aspies are specifically the ones to tell people what they want to hear, but don’t we all do that? Shared beliefs allow social cohesion for everyone. It’s not purely an Aspie approach. People join groups who have common beliefs based on religion, work, politics, hobbies, and more. I think the difference for an Aspie is just that it’s easier to work in these organisations than in a varied informal group where the wrong opinion could offend more easily.

Wendy is living proof that an Aspie can be speakers and authors. Some Aspies might get nervous when speaking in front of a crowd, but so do most ‘normal’ people. Wendy’s book is specifically about improving the social lives of Aspies. I think the book puts those with Asperger’s in a pigeon hole a bit too much, but she has focused on an issue that’s relevant to her. I personally think it is possible to learn to mix socially. But some individuals just don’t find it that easy.

James is definitely a bit more severely affected because he has an intense fixation on busses, but I think that doesn’t make him strange. Of course this area becomes the industry he wants to work in, but that’s a good thing.  Once again, this focus on one topic is an Asperger’s trait that I think we all have to some extent. We all pick an industry we’re keen on. And we all have a hobby we can’t get enough of. This fixated focus also shows a dedication. Would you really want someone to work long hours on a job the person doesn’t like? Of course not. We need to focus on our true interests to stay motivated.

Akash and his band are the biggest inspiration for me because they collaborate well on successful music together. Who in the world doesn’t prefer to work with people who have similar personalities to themselves? It’s human nature. Akash emphasised that his other band mates had previously only played at the disability-themed night club. There’s nothing wrong with that, and it’s great that people who feel different can unite through the difference that they have in common. But I was more impressed when Akash aimed to give his band experience playing professionally in a variety of settings. What it showed was that people don’t need to go into a pigeon hole. Sure, these people were different. But everyone is different.  They were accepted by the general public to succeed in their own ways.

That’s just one girl’s take on this show. Please watch Alone In A Crowded Room and make your own judgment about people with Asperger’s. I personally think our differences make us normal. Nobody is truly a clone (unless you’re a storm trooper in Star Wars). Hopefully you will see from the show that people with Asperger’s are not wrong, just different.
Asperger's Syndrome Entertainment Motivation