Dressing up for The Rocky Horror Picture Show 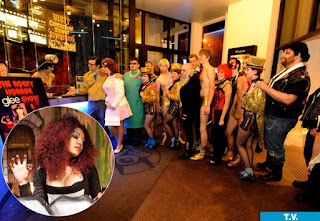 Dedicated fans of The Rocky Horror Picture Show have been dressing up for cinema screenings for years. This cult craze has became just like Halloween - a chance to be someone they're not for a day. It all started when American ticket sales were dropping, and so the movie was then played at midnight instead. Although this unconventional film was not your typical rom com (it's probably a whole genre of it's own), the theatrical rock musical was perfect for a crazy late night out. A College Fashion site lists some dedicated detail some groups go to in the US of A. They paint their faces white. They dance. They even use water guns to imitate the famous rain which starts off the movie's journey. Crowds all over the world now participate in the movie with heaps of involvement.

Comic Con is also another reason for fans to look like Dr. Frank-N-Furter, Janet, Brad, the maid, the servant, or anyone else. Check out this quick video:

It's not just unknowns imitating these wild characters. Someone was nice enough to share on Youtube Fez's get up as Dr. Frank-N-Furter on That 70's Show.


So take some inspiration from our foreign friends in the blogosphere and make the most of your next RHPC night. Wear something short & black. Maybe paint your face white. Wear some funny glasses like Elton John used to, because those specs were worn in the Time Warp scene. Whatever you choose, have fun!