As a Liberal, I suggest: Someone tell Alan Jones to stop talking. Please. 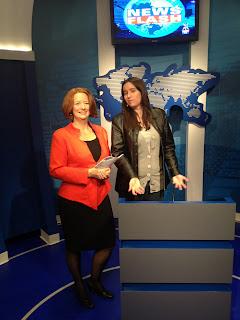 As a Liberal, I suggest: Someone tell Alan Jones to stop talking. Please.

Alan Jones recently said something nobody on either side of politics should ever say. Alan has once again made front page news for a PR disaster. He should have known better. He was recorded at a speech for the Sydney University Liberal Club as saying Julia Gillard’s father “died of embarrassment.” This personal attack is disgustingly unpeaceful. Political debates should stay in the political context. They should never be reduced to personal insults about a fellow human being’s grief.
Allan Jones needs to realise he is in the public eye 24/7. We live in a world where smart phones record anything, anywhere.  Ordinary audience members will record significant statements when they feel it is necessary. Regardless, those officially hired to record the audio of a speech are not always required to keep the speech secret. No matter whom the audience is, word will get out about startling statements.
There are some things we just don’t say to any audience or in any conversation. We can have our political opinions without becoming too personal. I am a supporter of liberal values. I believe in freedom to do what we want as long as it doesn’t hurt anyone else. Anyone else has freedom to disagree with this political viewpoint. But when speaking to a liberal crowd, there was no need to bring Julia’s father into the discussion. Discuss policy, not paternity. Keep it relevant.
Knowing a bit of history about Alan Jones, it is doubtful he will ever learn respect. Mr Jones was the harsh teacher at a prestigious boarding school in Sydney during a former life. He played favourites, publically humiliating and yelling at some students simply because they were not ‘favourites’ of Mr Jones. This same picking and choosing continued after Jones’ teaching career, and during his radio career. He still expects to get away with playing the school yard bully. Maybe the reduced support from advertisers will put a dollar value on his lack of appropriate attitude.
Let us all learn from Alan Jones’ mistakes and never turn into the school yard bully. Peacefully disagree with people in a respectful manner. Always speak as though the whole world is watching.
News