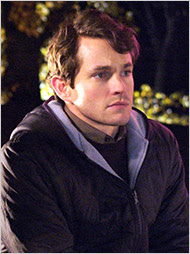 Tweet There are definitely some stereotypes about Asperger's Syndrome thanks to film & TV characters over the years. There is some truth in them but also some fiction.

The main character in Rain Man appeared to be severely Autistic, although The Guardian implies the real rain man Kim Peek didn't actually have Autism. Autism is extremely different to Asperger's. They're both on the Autism Spectrum and therefore could be confused with each other. But the AS spectrum is like a continuum from high-functioning to low-functioning. Some people diagnosed might not appear to have it at all.

Adam was a touching film about a man with Asperger's Syndrome who just can't figure out his social life. Although it was great to hear about the topic on the big screen, AS was stereotyped as a handicap completely preventing normal socializing. Some signs like Adam's facial expression were accurate. And his misinterpretation got him in all sorts of strife. The closest the movie gets to normalizing it is when he lists Einstein, Jefferson, & Mozart as potential past Aspies. Just remember not all Aspies are not as socially stunted as this one. Here's a trailer for those who missed Adam in the cinemas.

One of the best lines in the former film is, "I'm not Forest Gump, you know." That brings us to our next stereotypical story. Forest was by no means Aspie. He was, in some ways, more on the low-functioning end of the spectrum. The online world mainly only speculates about Forest's mentality. But he has definitely at least been unofficially associated with these conditions. Just remember most of us aren't quite like Forest.  Here's a trailer for a catch up.

No Aspie story is complete without our socially shocking modern-day genius, Dr. Sheldon Cooper. He's became a poster boy for the condition, but he's not the definition of it. Sheldon often does look like a classic Aspie and probably should have been diagnosed. He had to tell Penny, "I don't particularly excel at reading facial expressions." His smile looks as odd as Mr. Bean (and yes some of us know how to smile). But no two Aspies are alike. Don't assume we're all math-savvy like Cooper. And we definitely don't all need an Algorithm to make friends. But at least Sheldon prompted a dialogue on the topic from the world of geeks & Big Bang Theory fans.

Definitely check out all these shows to see how diversity is represented in characters. Just remember every single human being in this world is different. No two Aspies are alike, but they definitely make for some great TV.