Elizabeth Wilson awarded with the Medal of the Order of Australia

Elizabeth Leigh Wilson became a recipient of the Medal of the Order of Australia in the Australia Day 2016 Honours List.

Both Elizabeth and husband Gary hold this award for service to Toastmasters.

Elizabeth was has been serving the community long before Toastmasters. She joined Toastmistresses in 1967, an organisation for women before females were allowed in Toastmasters.

She was interviewed on television in 1976 to publicise Toastmistresses for the women of Australia. The interview is now available on Youtube.

Elizabeth served as Chairman of the Ladies Committee at the 1973 Katoomba Conference for District 70 Toastmasters. She was known by her middle name, Leigh, until the early 2000s.

Elizabeth Leigh Wilson became the first female District Governor of District 70 Toastmasters in 1987-1988. Her district was all of New South Wales and the Australian Capital Territory.

This dedicated Toastmaster and grandmother continues to serve the community now during her senior years. Elizabeth and Gary still work on vital services such as Toastmasters Supplies Australia.

The Its An Honour web site says, "Consideration of a nomination can take between 18 months and two years."

Elizabeth would like to thank Gary, Districts 70 and 90 of Toastmasters, and the family.

Elizabeth says she is feeling, “Unbelievable, honoured, and proud.”
Her entire family feels very proud of her warm generous contribution to many communities.

Elizabeth was interviewed by a couple of journalists. This will be published later in the print media cycle.

The list was also published in an article by the Daily Telegraph. 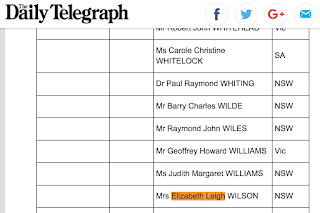 Elizabeth Wilson was diagnosed with cancer 2 years ago, at the same time as her husband Gary Wilson was awarded with his OAM. Elizabeth can be seen in photographs often sitting down in chairs at Gary's investiture, as she was not healthy enough to walk around. 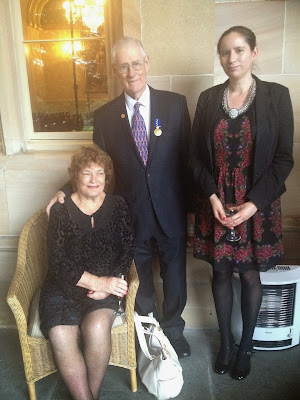 Her operation was successful, and she underwent a series of treatment. It is an overwhelming joy to see Elizabeth experiencing her own OAM now during stable health.

Elizabeth celebrated the OAM announcement on the eve of Australia Day, with close family and friends. It was a relaxed gathering at her home. 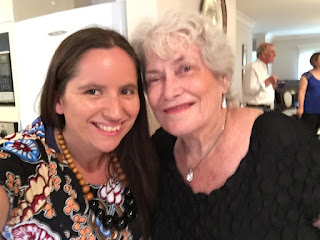 The below Record of Service was submitted to Government House for the award:

Record of Service in Toastmistresses and Toastmasters

A member of International Toastmistresses since 1968 (Life member). Held many offices culminating as President of the Australian Region of Toastmistresses Clubs 1977/78.

Joined Toastmasters International in 1983 after that organisation admitted women to membership, being charter President of one of the first mixed clubs.

Served each year in elected roles, becoming the first female District Governor for Toastmasters District 70 (NSW and ACT). Received an award from Toastmasters International for leading her District to be the No. 1 ranked District in the world for club membership, using a theme of “Care and Share”.

Co-Chairman for a Toastmasters Down Under Regional Convention. Since then acted as Mentor for Conference Chairmen, assisting them by taking on roles such as Assistant Conference Chairman, Conference Secretary and (on 9 occasions) looking after Conference registrations, special meals and table seating.

In 2007 appointed as the Host District Chairman for the first International Convention of Toastmasters to be held outside North America in 2010.

Chairman of the Toastmasters Leadership Institute in 2006-2008, preparing and organising all Club Officer Training in the District.

From 2007 to the present, Toastmasters Supplies Sales Officer for Australia handling all enquires and sales of supplies for the 700 Toastmasters Clubs in Australia.

Elizabeth was a school teacher by profession, retiring in 1994 as Deputy Principal of Tara Anglican Junior School for Girls.

During her years in Toastmistresses and Toastmasters, Elizabeth combined her teaching skills to become recognised as a world class trainer and seminar leader, specialising in presentations in the areas of communication (public speaking, listening, thinking, evaluation) and leadership, management, chairmanship, meeting procedure and conduct of meetings.  Over the years she has presented over 100 sessions to clubs, areas and district conferences in District 70 as well as being a major presenter at Club Leadership training for 30 years. She also presented at many conferences and functions around Australia, in Singapore and at the Toastmasters International Convention in 1991 at Las Vegas.

Elizabeth has conducted many Toastmasters Youth Leadership and Speechcraft programs for the general public. Because of her exceptional skills, she has also conducted around 20 Speechcraft programs for staff of leading companies such as NAB, CBA, Telstra, Sydney Water, Mayne Health, Shell, James Hardie and Cumberland Newspapers, corporate courses being presented voluntarily in order to raise funds to promote the purposes of Toastmasters.

She has also conducted seminars or training sessions for a range of community organisations to help their members develop personal skills.  These organisations include the Liberal Party, Institution of Engineers, Aust. Share Guide Ass., Aust. Organisation for Quality Control, Aust. Medical Ass., Masons, and Scout leaders.

As an example, for over 10 years she voluntarily worked at the NSW Royal Easter Show training the regional representatives in the Miss Showgirl and Rural Young Achievers competitions in self-confidence and presentation skills before they faced the Show judging panels.

Outside of Toastmasters and Toastmistresses, Elizabeth’s volunteer work includes