The musical legend Judith Durham was recently recovering from a brain haemorrhage which shocked fans globally. It is great to hear Judith is improving. The Seekers postponed their 50th Anniversary Tour around May 10th after the band's manager realised Judith should go to hospital.

I was one of two winners who would have been meeting The Seekers at a concert on Monday 13th May. But Judith sadly became unwell in the week prior. At least I got to see them in a concert on the previous Monday.

Of course it would have been amazing to meet my favourite band. I have been listening to all their songs throughout my life. There is something therapeutic about Judith's voice. But now the top priority is for Judith to get better. Every news report on this brought a tear to my eye. I felt scared and worried about what would happen to her. There is great hope now she is getting a bit better.

I wrote a concert review after I saw The Seekers perform recently. This would have been published after meeting them, to add extra perspective. But I might as well post it now since we don't know when The Seekers will resume their tour.

The concert I did see was a trip down memory lane. My earliest memories are a 90s Seekers concert and 60s videos. But there were plenty in the audience who could have been at the original concert, or heard 60s records when they were released. And of course The Wiggles have reintroduced little kids to The Seekers' Morningtown Ride.

In light of all this, here is my review of a recent Seekers concert:


The Seekers 50th - The Carnival is Not Yet Over

Australia's first internationally successful band are celebrating their 50th Anniversary. And what better way to honour this achievement than with some concerts?

Judith Durham, Keith Potger, Bruce Woodley, and Athol Guy performed last night at the beautiful State Theatre on Monday 6th May. It was great to see them all back together.

What an amazing venue. This elegant traditional theatre is the essence of class. Chandeliers and fine art adorn all the walls. An intimate auditorium is cosy enough that everybody feels close to the stage.

This meant the projector screen was easily used for visual accompaniments, instead of showing the stage action. The band talked through reminiscent video clips ranging from 60s footage, to a TV satire featuring Gina Riley. Some of their live songs were accompanied by videos and photos of the same songs. The Seekers told stories really well with the video screen.

The Seekers really do sound as great as ever. What a unique blend of vocal harmonies. And some very upbeat songs were played at just the right time. The show started with all 4 musicians diving right into the upbeat hit Come the Day. Judith was in her element when the band involved the audience in A World of Our Own.

Tom Springfield was acknowledged for the Seekers hits he wrote. I'll Never Find Another You will go down in history for its chart topping success. A wholesome message of loyalty is behind these lyrics.

Of course Georgy Girl was another classic hit to revisit. This one ruled the American charts, and is an icon of the era. Homer Simpson once sung at home, 'Hey there, blimpy boy.' Everyone knows the tune.

Speaking of appropriation, The Seekers clarified about a song which current children associate with The Wiggles. I grew up hearing The Seekers sing this one in 60s and 90s recordings. They brought us back to the children's lullaby Morningtown Ride, with the original 60s music video as a background.

The three boys Athol, Keith, and Bruce took us down memory lane with a folk harmony which was recorded early in the 60s. Louisiana Man is a fast paced toe-tappin' tune. These lovely lads still combine to form powerful blended vocals. For some reason, I just have a weakness for banjos.

Everyone from my generation will remember I Am Australian by Bruce Woodley. The whole nation has sung along, especially to the chorus, at one time or another. Individual members sung separate sections which told stories.

Solo performances also showcased individual Seekers. Keith Potger shared a romantic ballad from the Future Road album. It was calming to listen to. I appreciated hearing his solo voice. Judith Durham took the stage for her timeless song by Tom Springfield, The Olive Tree. Her bell-like voice flowed from note to note seamlessly. Solo songs were as special as the classic band songs.

The Sydney concert for The Seekers 50th Anniversary was beautifully reminiscent of their entire journey. This group has achieved continuous success throughout their impressive career. Their music is timeless, appealing to all ages. 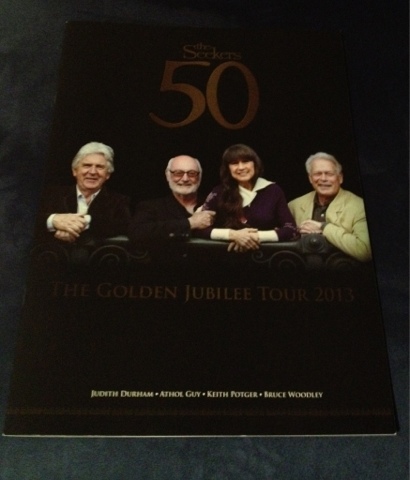