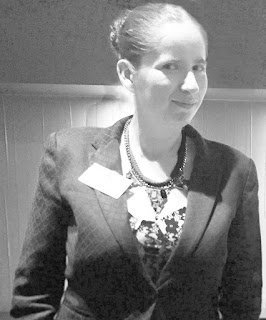 Lady Gaga has perfected the art of sharing parts of of life with her fans. Her latest focus is Miss Asia Kinney, her dog. Miss Kinney was recently given her own separate Facebook page earlier in 2015. This is a great campaign alongside Gaga's own page.

It personifies her dog in a relatable way. Gaga appears happy and social with something many people enjoy. It shows there is more to Lady Gaga than stages and studios. She looks balanced. This is crucial.

Miss Asia Kinney is personified for a very important reason. Paris Hilton carried small dogs around during a phase which included her television show, A Simple Life. Yet the dogs appeared in the media just as accessories, carried in handbags. They were not known in their own right. They were not understood, hidden from the public's understanding. Whereas Lady Gaga is treating her dog as a character in the narrative story of her public life.

Yet the dog does not delve into a simple casual image for Gaga. The Facebook banner features a photograph of Kiney on a luxurious pink lounge with pink textured cushions. Kinney posed with handbags, poked her face out the windows of luxurious cars, and donned sparkly bling jewellery. Lady Gaga may be wearing longer dresses these days. Yet she still lives her life in costumes for public eyes. And so should her perfect pup.

Stefani Germanotta is making a clear turn, in 2015, from Mother Monster to elegant style queen. Lady Gaga gained attention towards her music for wearing everything unexpected. Yet she reached a point where spectacle became expected. Quirky strange outfits became her norm.

The only way to get people's attention again, creating a surprising novelty, was to go to the other extreme. Lady Gaga gave a glorious rendition for a "Sound of Music" tribute in February 2015. This was the far leap from Bad Romance, which would appeal to a very different audience.

Lady Gaga's image transformation has been a few years in the making. Gaga performed and recorded with Tony Bennett since they met in 2011. Surely she has not hung up the meat dress and other jaw-dropping costumes forever. Stefani Germanotta is simply diversifying in new related fields. Diversification is a luxury Lady Gaga has definitely earned.

Now her dog is famous. Miss Kinney is quite acquainted with the media spotlight. She recently featured on the cover of Bazaar magazine, and is now the face of Coach. What better way to carry your pet dog, than in a designer handbag. Miss Asia Kinney is definitely shining in an array of hashtags.

Audiences are responding to the furry friend. The attention may have something to do with her famous owner, which she calls "Mommy." Still it's a separate individual brand identity with separate social media pages. That seems to be fine for the excess of 79 000 Facebook followers/likers and 194 000 Instagram followers. Sure, that's a bit shy of Gaga's numbers above 61 million Facebook followers. Still, Miss Asia Kinney achieved more in 2015 - than what some humans achieve in their entire lifetimes.

It is a long name. So my personal recommendation is to call Miss Asia Kinney "MAK." With that in mind, we will all be watching "MAK" for inspiration.