The story of my grandfather going into hospital 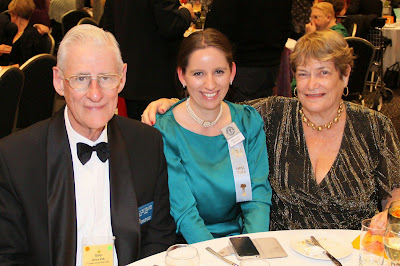 My favourite family photo ever...

I recently read an email which went along the lines of this: "Sorry I won’t be able to join you on Sunday. Five minutes walking brings on real distress for me at present. Those who follow real media will know about my condition, See Column 8 in today’s (Saturday) and also last Wednesday’s  SMH."

My grandfather was unwell. I was gradually piecing together the puzzle which had apparently been hidden in Column 8 of The Sydney Morning Herald. It is not normal to blog about a family member going into hospital. But it's equally abnormal to read about such hospitalisation in the paper.

So, as the information was scattered across multiple editions of a publication, I feel the need to put everything into one place. Here's the story of Gary Wilson going into hospital, as told by Melanie and media.

I was alerted to the issue after the following couple of lines in an email from Gary:


"Five minutes walking brings on real distress for me at present. Those who follow real media will know about my condition, See Column 8 in today’s (Saturday) and also last Wednesday’s  SMH."

"I have just purchased a $4 'Hand-Pressing Flash Light'," reports Gary Wilson, of Oatlands. "Some remarkable features are listed in the product description, to wit 'This product is made with high and new science and technology. It can illuminate only placing it in rhythm. Constantly using this health torch, it can benefit your palm, arm and shoulder stretching and blood circulation, so as to let your hands relax and brain clever, hand and brain coor dinate and promote your brain memory and health composition. Low noise and health. Comparing with common torch, it can be several times on lift." Yes, it is an LED torch, but I'm waiting for the other benefits to kick in."
Read more: http://www.smh.com.au/comment/column-8/column-8-20151208-gli6eo.html#ixzz3uNUWlNDq 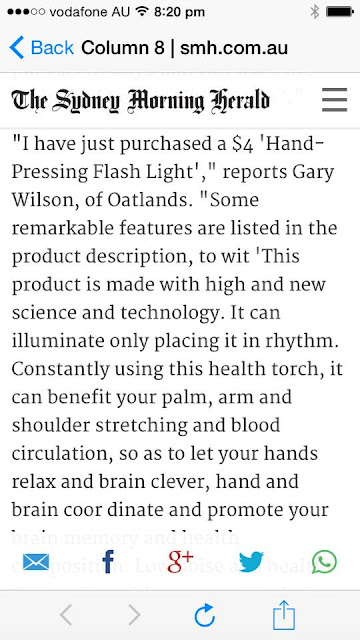 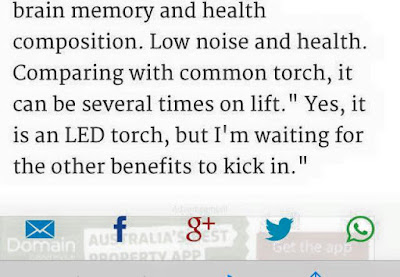 The story continued in the SMH on Friday, as seen in the link and screen shots taken on my phone.

"As a very healthy man I laughingly threw off at the remarkable features of my new torch," writes Gary Wilson, of Oatlands (as indeed he did, in Column 8 on Wednesday), "saying I was waiting for the claimed health benefits to kick in. But I had an angina attack this week, failed a cardiac stress test, and find myself going to hospital on Monday for an angiogram and possible stent or bypass. Is this the revenge of the torch, or some spell cast on those who mock language in Column 8?" It's the evil torch. Column 8 accepts no liability in the matter! 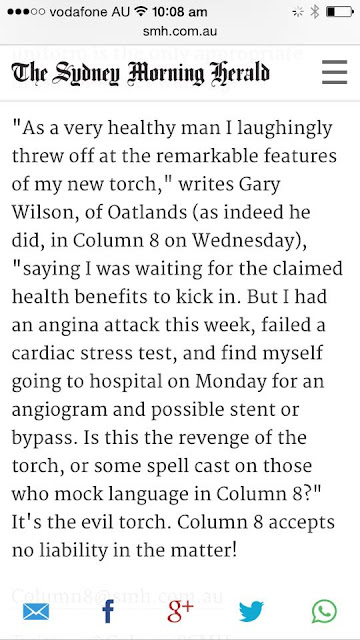 The rest of the story played out more in emails and social media.

My grandmother Elizabeth wrote on Facebook on Monday 14th December, "He is fine and had a stent put in this afternoon. He come home tomorrow."

Elizabeth announced Gary's return home on Tuesday 15th December, in an email to family and friends, "Just to let you all know that I have finally got Gary home after a hiccup last night... the hospital kept him there till 1.30am today and we left after he was cleared by the doctor.  He is now resting at home with me looking after him although I will leave him tonight to go to a bridge party."

It's been around a year and a half since the events of May 2015. At that time, Elizabeth was diagnosed with cancer and Gary was awarded with the Medal of the Order of Australia (OAM).

It is safe to say my grandparents had more drama in the past couple of years than in quite a while prior. I am sure they will be ok. I love them.