Sarah Blasko is a Heavenly Sound 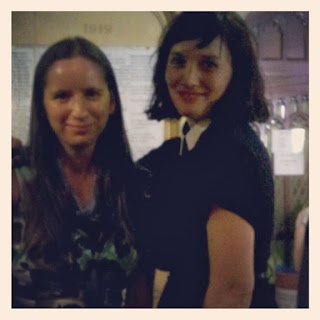 Sarah Blasko has been performing in churches for the Heavenly Sounds tour. What a perfect venue for an iconic singer.

Her whispery angelic voice echoed through the St Stephen's Uniting Church in Sydney on the 14th January. Red and blue lights bounced off the elaborate walls in this old building. Blasko's songs came alive, accompanied by just a couple of guitars and a piano.

This Aussie superstar is really going from strength to strength. Every song tells a story. Explain had an environmentalist feel. And God Fearing is apparently about the recording industry. All I Want is about individual identity. The audience was able to relate to each song.

Sarah engaged with the audience through conversational explanations of songs. And she knows how to handle unusual fans. One enthusiast repeatedly yelled out praise in between songs. Sarah politely thanked the girl for everything she said. And knew when to ask the band for wrap-up music.

Sarah Blasko also took the time to meet every fan who waited after the show. Not all celebrities do this. She happily posed for selfies and signed anything people brought. Sarah must be a night owl. During the show, she announced her plans to stay back after. She said people can go home earlier if they wish, but 'it was still early.' A true leader and communicator connects with the audience. And that is what Sarah Blasko did.

Thank you Sarah for bringing all your albums to life. Your unique voice always creates such a moving atmosphere. Each live song truly is as perfect as the recordings. We all look forward to your next tour.