Fire at The Rocks on NYE

January 01, 2013
I have corrected this post to clarify that we are unsure what exactly was on fire within Te Rocks. What we do know is that very little media coverage was provided about this event. Presumably, the mass media were required to present the Sydney NYE fireworks as the most successful in the nation. This angle does not leave room in the story for failures such as arson.

As Sydney watched fireworks on New Year's Eve last night, a fire developed from The Rocks near Circular Quay. The immense blaze was growing until fire services and police rescued the scene between 11:30 and midnight. An ambulance took a young girl who appeared to be struggling to stand. Hundreds of celebrating party-goers were evacuated from the site as smoke grew. Police did not initially inform surrounding crowds about the cause. 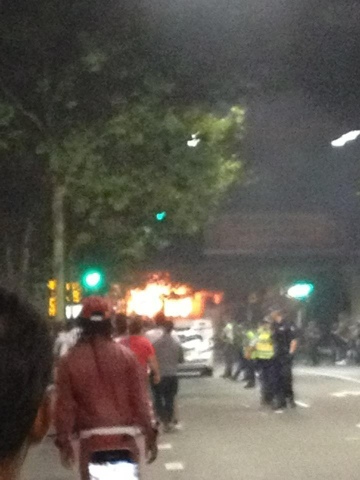