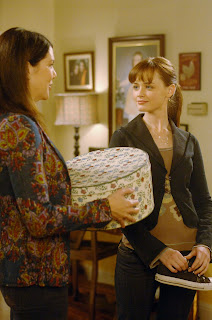 Image from Fan Pop
As a teenager, I had no idea Gilmore Girls was so commercial. The show appeared innocent with their small town and quirky characters. It was all about feminist ambition and independence. Why cook and clean when you can do your homework or run your own business? That's the message we got from the show. But beneath the free spirited style was a carefully run program to get us to eat and consume more. I should have noticed the product placement at an early age. And I now know more as a marketer. But most teenagers don't know any better.

A lot of sites and books talk about the commercial nature of the show. Just Google, "product placement Gilmore Girls." My PR course actually mentioned that P&G and other companies funded the launch of GG so they could get their many brands onto the small screen. That's fine, it's extra exposure that the marketers need for their brands to grow. But I think there are right and wrong products to push into characters' conversations. Some stuff is better consumed in small doses.

Check out how beautifully slender the these girls look. The show's creator once said the girls weren't allowed to eat a bagel. In fact, Lauren Graham and Alexis Bledel specifically told fans in DVD interviews that no, they did not eat as much food as their characters consumed. But it was far too easy to get caught up in the magical fun of the show's social scenes. And start to copy the girls too.

I don't mind other product placement. Back when the show was originally on TV, maybe around seasons 6 and 7, you could visit the CW site and buy the clothes Alexis and Lauren wore on the show. The characters had been established as having unique styles unto their own. So what if those styles actually came from which-ever brands were popular in the US? So be it. I love clothes. I'm not complaining.

My problem with the product placement was that it was done with an image of overeating, sugar coated by an appearance of fun. We should expect that from advertisements, not TV shows. We all know we should eat well. And we all know TV shows are not 100% realism. But I am now realising plenty of people would have sub-consciously been convinced to just throw in an extra pop tart or frozen pizza into the day. Why? Because Lorelei and Rory did. These were characters we looked up to. Just remember they had a habit which made them as flawed as everyone else. If only these characters' waistlines could have appropriately  suffered the consequences.