Bridesmaids is an awesome movie! 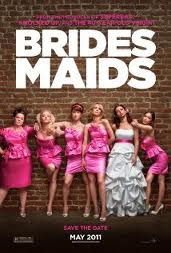 There's an awesome movie I just have to tell you about. I never saw the movie when it first came out, and I am totally thankful to be seeing it on DVD now. Bridesmaids is a completely inspiring story because it reminds us that the only person who can change your life is yourself. We often stumble upon challenges either because of the universe or because of us. The question is then what we are going to do about it. What a brilliant parable to take from a chick flick.

Melissa McCarthy's character inspired us with her own story about striving for the best. Having admired Melissa since Gilmore Girls, I was glad to see her play such a diverse character. Megan doesn't really gain positive attention during most of the movie because she keeps her true successes to herself. That in itself is a lesson to avoid judging people we don't know so well. It was great to see a character who doesn't always need to show off or boast. Movie characters are so often about outward success, it is refreshing to see inward confidence instead.

The story is completely relatable in an era of rocky economies and competitive ambitions. Any film that admits human imperfection gives us much more to learn from. The bride's maid Annie watches her life fall apart in the lead up to her friend's wedding. The loss of her business was just the start of it. She then loses her job, struggles with some blokes, moves back home with her mother, and gets up-staged by a fellow bride's maid until she reaches breaking point. Sometimes we feel like we have nothing left when actually we don't see what we do have and what we can do to change our lives. I am very thankful to see this lesson in a chick flick. Kristen Wiig's character encaptures how most of us feel at some stage during life.

Who would have expected Megan to teach us the real moral of the story? This is Melissa McCarthy's time to shine. This conservatively dressed character suddenly shows virtuous loyalty to a friend. We learn she turned her own life around by getting past the horrible bullying at school and working hard to become qualified in a great job which made her kinda rich. Nothing was handed to her. Annie uses this story to then push herself to achieve goals despite her insecurities and fears. She is an example we can all learn from in overcoming obstacles to reach our goals. It reminds us to work hard and then disprove any doubts that we or others have about ourselves. I definitely recommend this flick to anyone who needs some uplifting motivation. Bridesmaids is such an inspirational movie